Fourteen days – two weeks and we know who is KING!

The following is taken from the United States Bishops website:

“We suggest that the fourteen days from June 21—the vigil of the Feasts of St. John Fisher and St. Thomas More—to July 4, Independence Day, be dedicated to this “fortnight for freedom”—a great hymn of prayer for our country. Our liturgical calendar celebrates a series of great martyrs who remained faithful in the face of persecution by political power—St. John Fisher and St. Thomas More, St. John the Baptist, SS. Peter and Paul, and the First Martyrs of the Church of Rome. Culminating on Independence Day, this special period of prayer, study, catechesis, and public action would emphasize both our Christian and American heritage of liberty. Dioceses and parishes around the country could choose a date in that period for special events that would constitute a great national campaign of teaching and witness for religious liberty.

In addition to this summer’s observance, we also urge that the Solemnity of Christ the King—a feast born out of resistance to totalitarian incursions against religious liberty—be a day specifically employed by bishops and priests to preach about religious liberty, both here and abroad.

To all our fellow Catholics, we urge an intensification of your prayers and fasting for a new birth of freedom in our beloved country. We invite you to join us in an urgent prayer for religious liberty.”

Almighty God, Father of all nations,
For freedom you have set us free in Christ Jesus (Gal 5:1).
We praise and bless you for the gift of religious liberty,
the foundation of human rights, justice, and the common good.
Grant to our leaders the wisdom to protect and promote our liberties;
By your grace may we have the courage to defend them, for ourselves and for all those who live in this blessed land.
We ask this through the intercession of Mary Immaculate, our patroness,
and in the name of your Son, our Lord Jesus Christ, in the unity of the Holy Spirit,
with whom you live and reign, one God, for ever and ever. Amen. 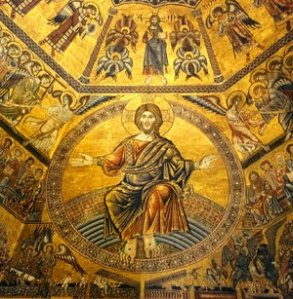 Today will celebrate the Feast of Christ the King.
This feast marks the end of the liturgical year; falling on the last Sunday of the Church’s calendar year. Pope Pius XI inserted this feast into the Sacred Liturgy at the closing of the Holy Year in 1925. In his encyclical, Quas Primas (On the Feast of Christ the King), a very beautiful and often neglected one, which is of much relevance for our day, not only for the individual but also important socially and politically. In this encyclical the Pope writes the following about the Kingship of Christ:
“This kingdom is spiritual and is concerned with spiritual things. That this so the above quotations from Scripture amply prove, and Christ by his own action confirms it. On many occasions, when the Jews and even the Apostles wrongly supposed that the Messiah would restore the liberties and the kingdom of Israel, he repelled and denied such a suggestion. When the populace thronged around him in admiration and would have acclaimed him King, he shrank from the honor and sought safety in flight. Before the Roman magistrate he declared that his kingdom was not of this world. The gospels present this kingdom as one which men prepare to enter by penance, and cannot actually enter except by faith and by baptism, which, though an external rite, signifies and produces an interior regeneration. This kingdom is opposed to none other than to that of Satan and to the power of darkness. It demands of its subjects a spirit of detachment from riches and earthly things, and a spirit of gentleness. They must hunger and thirst after justice, and more than this, they must deny themselves and carry the cross.” (no.15)
Further, the Pope writes:

St. Teresa of Jesus was fond of the image of Christ as King. In her writings, the Interior Castle, she writes about our souls:

“It is that we consider our soul to be like a castle made entirely out of a diamond or of very clear crystal, in which there are many rooms, just as in heaven there are many dwelling places. For in reflecting upon it careful, Sisters, we realize that the soul of the just person is nothing else but a paradise where the Lord says He finds His delight. So then, what do you think that abode, will be like where a King so powerful, so wise, so pure, so full of all good things takes His delight?” (St. Teresa of Jesus, Interior Castle I, 1.1)

Christ is King and He should reign supremely in our heart and in our life for His law is the law of love; His reign is heavenly peace.

Preface of Christ the King

Father, all-powerful and ever-living God,we do well always and everywhere to give You thanks. You anointed Jesus Christ, Your only Son,with the oil of gladness, as the eternal priest and universal king.As priest He offered His life on the altar of the cross and redeemed the human race by this one perfect sacrifice of peace.As king He claims dominion over all creation, that He may present to You, His almighty Father, an eternal and universal kingdom:a kingdom of truth and life, a kingdom of holiness and grace,a kingdom of justice, love, and peace. And so, with all the choirs of angels in heavenwe proclaim Your glory and join in their unending hymn of praise:
Holy, holy, holy Lord, God of power and might,
heaven and earth are full of your glory.
Hosanna in the highest.
Blessed is He who comes in the name of the Lord.
Hosanna in the highest.